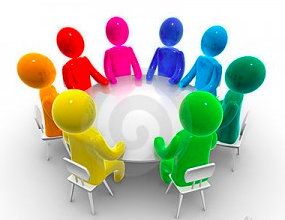 In order to “sell” stakeholders small groups should be a major part of the responsive services offered in our programs, we need to be clear on “Why Group Counseling.” Most counselors can explain how small groups are structured but to convince stakeholders why a student should participate we need to be clear on the why ourselves. At my school my part-time counselor and I run as many groups as time permits and need demands because we believe small groups are the best responsive service school counselors can offer. I was a classroom teacher so I enjoy teaching tier 1 lessons, especially now that we are using evidence-based materials like Second Step and MindUp, but I know that 15-20% of the students could use more help with social emotional development. These are the students who can benefit from tier 2 groups and there are 1-5% who need tier 3 groups (remediation and extra support).  Tier 3 groups and individual counseling typically address problems of living like illness of a family member, separation and loss, and grief.
Most of the groups we run are psycho-educational and focus on specific attitudes, skills, and abilities. They focus on typical areas of growth and prevent more transitory difficulties. Group members like the recognition that several others are experiencing the same developmental issues that they are. Yes we could work on these in individual counseling, but our ratio does not make that feasible. Besides we believe students learn from one another not just the counselors. Groups are ideal for improving communication and socialization. They also are extremely useful in fostering a sense of belonging and understanding. They promote development of positive interaction. Many of our groups focus on the need to increase self regulation and coping with difficult emotions.
Another reason why we offer groups is they provide exposure to a common set of skills but are flexible enough for each member to set an individual goal and work on it over the life of the group.
Once a teacher or parent is familiar with the small groups we offer they understand the WHY. However, for new staff and parents new to our learning community it is important to explain why a child might benefit.  We also work very hard to insure there is no stigma or record kept of group counseling participation. We want children and adults to see most groups as prevention and others there to support students who are experiencing some challenges - not that the members of groups have any identified mental health issue or specific disorder.
Posted by Mary Beth at 12:12 PM No comments: 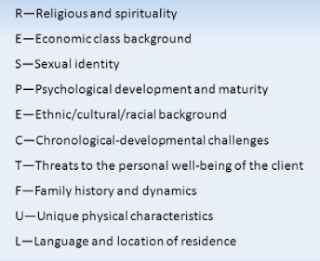 Multicultural counseling involves both the recognition of a counselor's own cultural values and biases and an understanding of the client’s worldview and the recognition of a counselor’s own cultural values and bias. School counselors need to continually strive to enhance their awareness, knowledge, and skills dealing with privilege, race, justice, and oppression. Cultural competence involves multiple factors. The RESPECT Model has been around since D’Andrea and Daniels (1997) outlines 10 factors shown above. ASCA published "Making Diversity Work" by Grothaus in 2012. ASCA revised its position statement "The School Counselor and Culture Diversity" in 2015. ASCA has 4
webinar-on-demand on Cultural Competence presented the past two years.

As counselors it is increasingly important that we continually revisit our cultural competence as schools become more diverse (see enrollment) For example, our school division like the US is no longer predominantly white. Racial differences is just one aspect of diversity we need to help our students deal with respectfully. My favorite resource for teaching diversity is tolerance.org It has a magazine, lesson plans, free film kits, webinars, and much more.
Posted by Mary Beth at 3:16 PM No comments:

Out of Your Mind 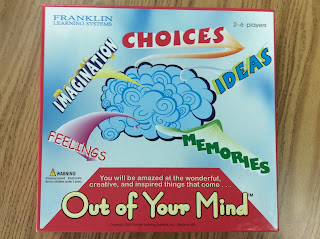 This noncompetitive game is a good resource for individual and small groups to get to know what students are thinking and teach social skills. Out of Your Mind from
playtherapysupply fosters empathy and teaches communication, listening, and decision-making skills.
The game consists of four card decks and a Feel Wheel—a conversation-starting spinner featuring 24 emotions. Each card deck presents activities that engage the imagination and inspire creativity:
Out of Your Mind helps reluctant children communicate effectively.  I use this game with students in fourth and fifth grade and I think it is a worthwhile resource for a school counselor's office.
Posted by Mary Beth at 3:01 PM No comments:

Props to teach mindfulness and the brain 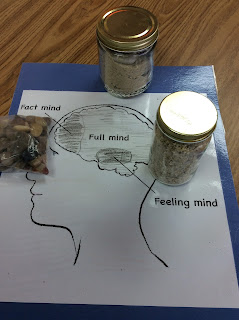 Mindfulness is an important but very abstract concept for children to grasp. We also try to teach our students that feelings generate from the back of the brain (amygdala and hippocampus) but that thinking occurs in the front of the brain (prefrontal cortex).  If our brain is totally full of feelings (represented by jar full of sand) then there are is no room for thoughts (represented by bag of rocks). The other jar has rocks and sand- our full mind should be a balance of thoughts and feeling. My students, especially those who are referred for self-regulation and emotion-regulation groups really like props. The like to touch the jars and then they color and label a handout that looks like the chart pictured above.Practicing mindfulness calms the amygdala and allows us to access the prefrontal cortex, so that we can make thoughtful choices for how to respond. Mindfulness helps children regain access to executive functions: the intention to pay attention, emotional regulation, body regulation, empathy, self-calm, and communications skills. This site has a great infographic and cute labels for the various parts of the brain to help children understand the different "jobs" of key parts of the brain mindfulness-and-the-brain-how-to-explain-it-to-children/
Posted by Mary Beth at 3:24 PM No comments: 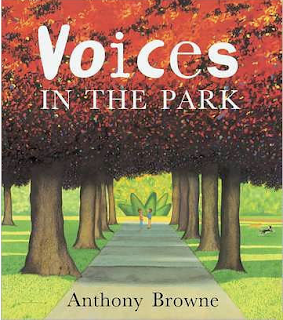 This is my favorite book to teach perspective taking in grades 1-5. It is easy for students to identify how each of the characters feel about the same event, a short outing at a park. They can also express how they would feel if they were either of the children in the story. I use this book in my emotional regulation small groups. Other books that are very good to teach these skills are:
Grey - The Pea and the Princess
Lewis - Not Inside This House
Ludwig - The Invisible Boy
Woodson - Each Kindness
Woodson - The Other Side
Posted by Mary Beth at 3:19 PM No comments: 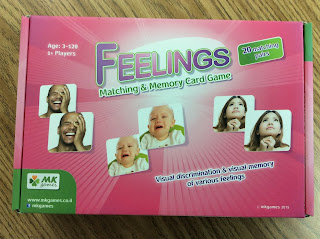 This is a great resource to help children learn to read facial expressions, build feeling vocabularies, and talk about feelings - all building blocks for emotional regulation and empathy. The photographs are great with 2 of each so you can play memory or concentration Feelings-Educational When the student makes a match you can have them use the emotion in an I sentence to promote expression of emotions. According to Decety and Cowell empathy involves 3 distinct processes: 1) emotional sharing; 2) empathic concern; and 3) perspective taking.  These processes can be taught individually and in groups through literature, modeling, and role-playing. Mindfulness practice has also been shown to help strengthen empathy by first noticing own responses then shifting focus to noticing the responses of others. I have used this resource in both individual counseling and in my small groups for emotional regulation.
Posted by Mary Beth at 11:15 AM No comments:

Icebreaker with a purpose 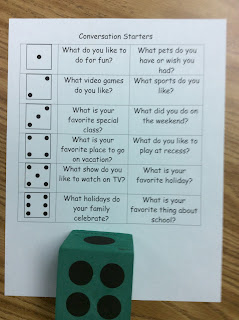 We are starting our second round of groups this week. Our part-time counselor and I will be running 22 groups. Our part-time counselor is only here one day a week. On that day she runs 6 groups. We have worked together for a long time so we share the planning of the groups. We put together booklets ahead of time so everything is preplanned. We can change an activity if we find something better or more appropriate but out students like knowing what is in store for the 8 sessions and it keeps us organized.
For our social skills friendship groups we First Steps for Social Success for round one of groups and now we are using Next Steps to Social Success four round two. Both these books from youthlight have 4 sections so we can select the lesson for each grade level we think best fits. We add icebreakers, books, and other tried and true activities that build friendship skills and handle social challenges. It is nice to have a well developed resource to serve as the basis of our groups.
To get our groups in grades 2-5 started we start with introductions since we pull students from 4 classes at each grade level and this helps cement names and then we do this dice game to practice initiating conversations in a nonthreatening way. The members simply roll the dice and what ever number is on top they say the members name and ask one of the two questions. We do it for 2-3 rounds and the students like it because it has clear procedures and structure so even if they are shy or hesitant in new situations they participate. It is important to do nonthreatening activities in this initial forming stage of a group. The dice can be easily cleaned so it has fewer germs for the next group! 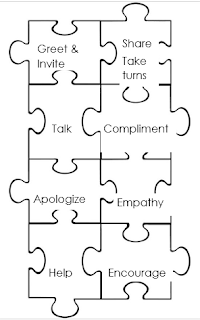 We get a large number of referrals for friendship groups in kindergarten. I have not found an evidence based curriculum I think meets the needs of my students so I put together a group we call "Puzzle Pals". I pulled most of the skills from Second Step which we use for Tier 1 and utilize some of the materials from the Early Learning Second Step kit as well. Over the years I have settled on the 8 skills listed in the puzzle outline above. I use the Second Step listening rules as the group rules which we sing to start the first 3 sessions. I have students rate themselves at the end of each session if they followed the rules or  oops I need to practice! We cover one skill a session.  For most of the session we read a book, practice the skill, and do a page in the activity booklet I make ahead. For example, for session 1 I read Say Hello by Jack & Michael Foreman and greet one another. At the end they draw a picture of themselves saying "Hi." The last session they get to do my Moods & Emotions puzzles I purchased from lakeshorelearning. They cannot race or say "I am done" which does not come across as polite and kind, instead I model encouraging language and compliments. When they finish a puzzle they use the feeling in an I sentence and share a time they had that feeling with the group (e.g., I felt silly when my sister told me a joke.)
I have evaluated the group using pre-post parent and teacher surveys and the results always indicate the members have improved their social skills over the course of the group. These results also reflect that the children have been in school longer and are getting more comfortable in the learning environment. The group seems to be most effective with 6 members from 2-3 different kindergarten classes. This allows them to practice the skills with other children they do not know as well but for shy students having at least one member from their own class keeps their initial uneasiness at a manageable level. 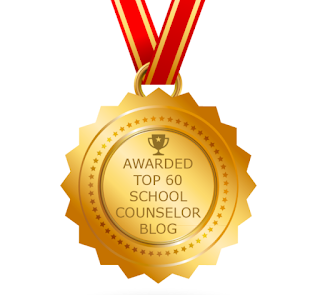 CONGRATULATIONS to every blogger that has made this Top School Counselor Blogs list! This is the most comprehensive list of best School Counselor blogs on the internet. I am very proud that my blog was ranked #8 this year! Check out all the great sites at school_counselor_blogs
Posted by Mary Beth at 4:17 PM No comments:

Mary Beth
Kentucky, United States
I am always looking for a new challenge and opportunities to share and network with other elementary counselors. I have my NCC and NBCT (School Counseling) credentials in addition to a masters degree and a PhD. I love to mentor new counselors. In 2011 the counseling program at my school achieved RAMP. We Re-RAMPed in 2014! I am a KSCA Board Member. I am a RAMP reviewer for ASCA and I serve on their Editorial Board.