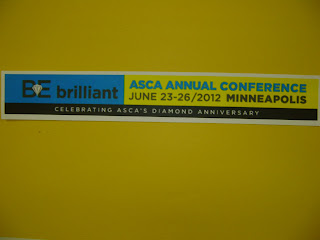 I feel very fortunate to be going Saturday - Tuesday to the national conference in Minneapolis.  I look forward to learning from other school counselors to get new ideas for next year.  I will be presenting a session "Why Worry? Reducing Anxiety in Children."  If you read this Blog regularly you know this is a topic I have studied and deal with on a daily basis.  I will be sharing ideas specific to school counseling but for anyone wanting just general information about worrying I recommend the book 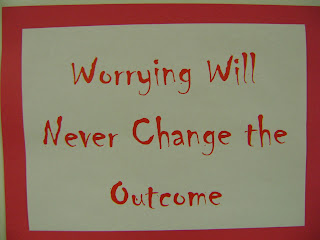 Today starts our final week in school for the year.  Yes we are still in school even though all other schools are out.  Amid the frenzy of closing out a school year, gathering up and reporting my program data, brainstorming goals for next year my personal email account was hacked on Friday.  I am now permanently locked out of the account and did not same a back copy of my contacts or print many important emails.  I also used that same password on many other sites so I spent the better part of my weekend changing passwords and trying to regain some of the lost information and contacts.  Let that be a wake up call.  Needless to say I needed to use all 10 of my favorite stress relievers. Maybe some of these are what you use or suggest to the students in your school.
1 Breathe slowly and deeply
2 Take a walk
3 Call a friend
4 Listen to music
5 Eat a healthy snack
6 Count my blessings
7 Gaze at my garden
8 Recite an affirmation (I can straighten this out)
9 Spend time with a family member
10Make a list of things to do on summer vacation
Posted by Mary Beth at 5:50 AM 1 comment:

On Friday I had a student brought to me by the mother, who needed support returning to school after a vacation.  The student was saying "I'm sick and need to go home." The child's class had to leave on a filed trip within a half hour of arrival.  Anxiety attacks are often chronic and the cause is sometimes not as clear as this one.  First, I separated mom and assured her I would support the child in getting ready for the trip and check to make sure this went smoothly.  I spoke to the student in a assuring but firm voice and reminded the child to use strategies we had discussed in prior counseling sessions.  I reminded the student of  the Anxiety Checklist we had developed that included slow breathing, counting breaths, thinking about a calm place, and affirmation (I am strong, I can do this.).  I told the student I'd be close by until things got better.  By the time the bus left the student was calm.  I then followed up with the mom who remained annoyed because she feels the student has more control than child can access under stress.  I was not sure I convinced mom that changes in schedules are stressors and we need to keep supporting the child as new strategies are learned.

The same morning I was tracked down in the building because another student was in crisis in the clinic.  When I arrived in the clinic the school nurse said the student had been extremely upset and had not regained control of emotions for over 15 minutes.  She said medically there was no concern, no asthma, and the mom had spoken to the child by phone and it had not gotten any better.  Since the child was already in a safe place (away from what probably was the stressor - an activity in the class), The child was displaying many signs of a panic attack, sudden onset of pounding heart, feeling of choking, chest pain, fear of loosing control, and sensation of shortness of breath. I began to talk to the student to give reassurance.  It took several attempts to to get the child to breath slower.  When I counted the lengths of the breaths. first 2 in and 2 out, then to 4, and finally 6 the child visibly started to relax.  Then I worked on distracting the anxious thoughts (student labeled as scared) by having the child list things  (members of a team).  I stayed with the student and then had the child do some stretching with counting to further reduce the level of anxiety.  Although most panic attacks will stop on their own after 15 minutes, this was the child's first major attack and it lasted about half an hour.  Then came the discussion of what to share and say to classmates; the child's explanation was my "brain exploded."  I urged the student to just reply to inquiries with "Thanks for asking, I am fine now."  I then had a long debrief with the mother.  She did not know children can have any type of anxiety issues.  I informed her what steps I had taken that worked in case the child has another episode at home.

It was a busy morning and on days like Friday I have to remind myself to take time for self care...
Posted by Mary Beth at 3:08 PM No comments:

Mary Beth
Kentucky, United States
I am always looking for a new challenge and opportunities to share and network with other elementary counselors. I have my NCC and NBCT (School Counseling) credentials in addition to a masters degree and a PhD. I love to mentor new counselors. In 2011 the counseling program at my school achieved RAMP. We Re-RAMPed in 2014! I am a KSCA Board Member. I am a RAMP reviewer for ASCA and I serve on their Editorial Board.